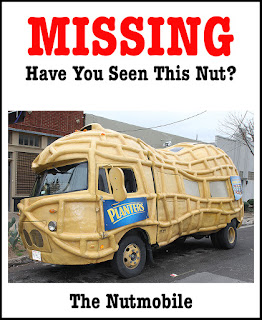 Well it had to happen...one of our favorite product mobiles has gone missing.  Details are sketchy but updates are coming in via social media.  Turtle Transit posted this surveillance video of the alleged thief doing the alleged thieving:

The frantic 911 call was posted by Mr. Peanut himself.  While he keeps cool you can tell the stress is starting to make him crack:

We'll keep an eye on this situation and can only hope the salty thief is caught and roasted.

Clash of the Titans

Two of the biggest and best product mobiles on the road have teamed up to promote Kroger...or something.  Anyway I'm too excited now to deal with he details.  It's all I can do just to embed this video:

Banana Car - Not For Sale!

Despite what you might see on Craigslist, the Banana Car is NOT for sale!  This ad popped up recently:

But according to the Banana Car's Facebook page, the ad is a fake: 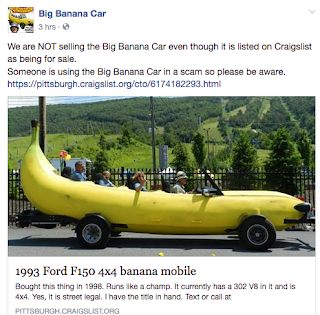 What nefarious reason would someone have to pretend to sell America's most beloved fruit-based automobile?  I shudder to even contemplate.  So do your reason before you buy!

I've mentioned before that Product Mobiles are woefully underused in television commercials.  Sure occasionally we'll get something like an animated cameo by the Planter's Nutmobile but for the most part our favorites are absent from commercial breaks.

But recently a little Youtubing led to the discovery of a cameo of Ronald McDonald's Big Red Shoe Car in an old McDonald's commercial.  You can see it in the background behind Ronald and the young child he brought to the middle of nowhere to star gaze: 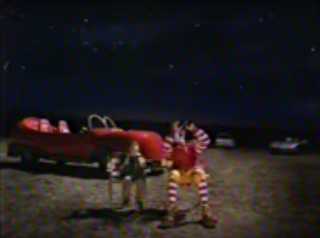 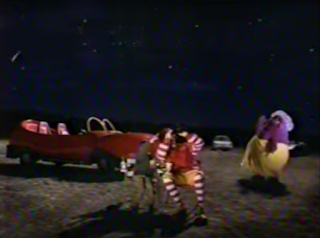 As you can see, toward the end of the spot, Grimace shows up in a towel ready to party.  Why?  You can watch it yourself to investigate: 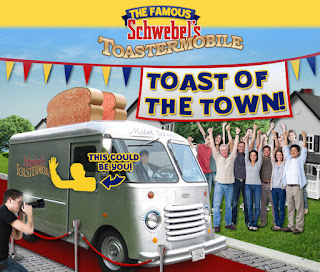 If you've ever wanted the Famous Schwebel's Toastermobile to show up at one of your parties then you're in luck!  You can enter HERE to win that chance!  And if you’re not too familiar with the Toastermobile, here it is on the road:

It's always a special event when two product mobiles meet. When more than two meet, it's like seeing a shooting star: certainly possible but very rare.  A few years back a unique camp out happened that involved some old favorites: 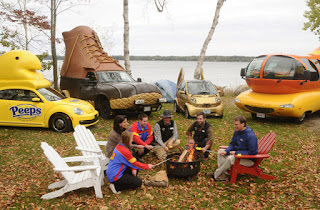 From left to right, the Peeps Peepster, the L.L. Bean Bootmobile, the Lindt Gold Bunny Car and the Oscar Mayer Wienermobile help a great big camp out in 2012.  Click HERE to for the details!

There was a recent sighting of the Dunkin' Donuts reported first on Reddit and then picked up by Boston.com which has me wondering... 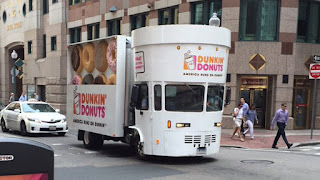 Are these trucks back on the roads?  Or was this a one time thing?  Do we dare hope for a national tour?  We just have to wait and see...

Todd Kent
I am an independent documentary filmmaker. My work ranges from educational to goofy.

Past documentary projects I have worked on include "Comic Book Literacy", "Fast Food" (following the wild & wacky exploits of product mobiles like the Oscar Mayer Wienermobile & more!) and earth science educational documentaries like "Oklahoma Rocks!" and "RockHounds: The Movie."